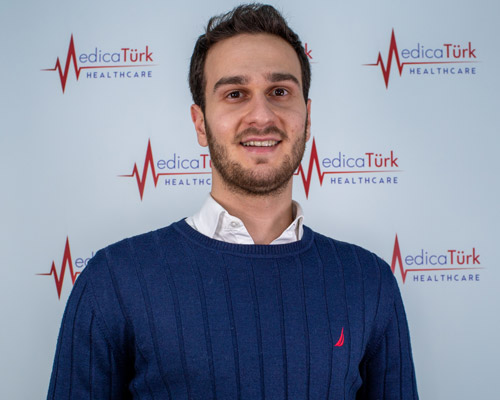 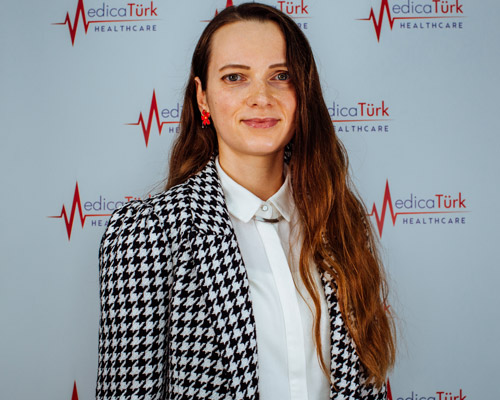 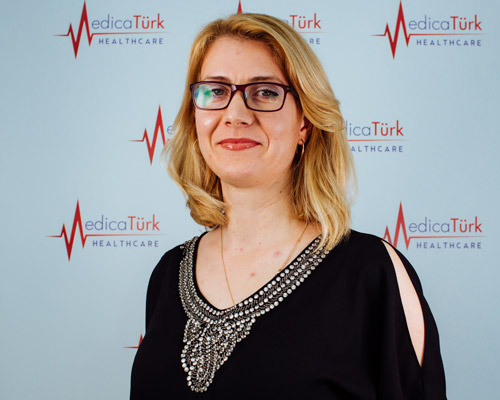 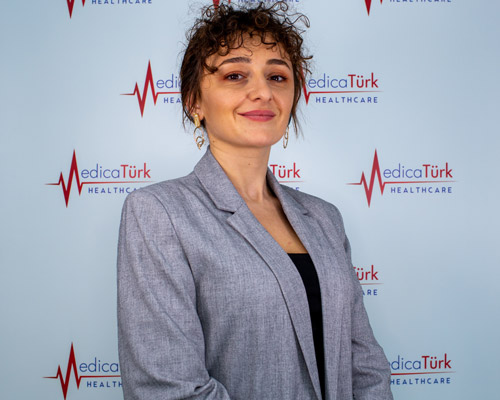 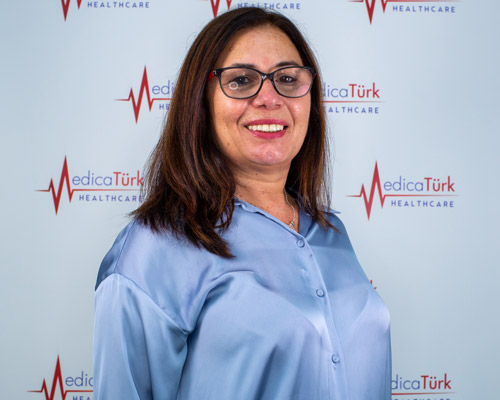 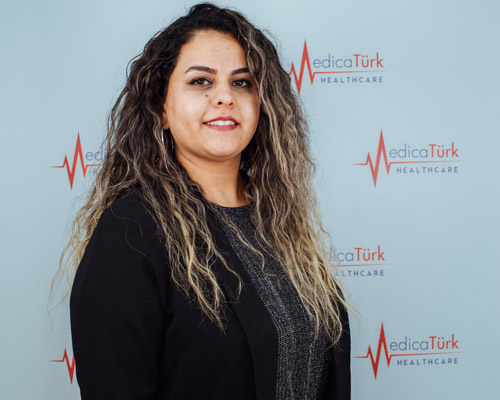 Minimal invasive surgery, which provides the least possible damage to the body integrity of the patient and shortens the hospitalization period of the patient and allows him to return to his normal life as quickly as possible, is successfully applied in the Urology Department, which is equipped with modern medical technologies.

With this method, the operation area is enlarged 10–20 times the normal, the surgery can be performed more gracefully and meticulously and blood loss is minimized.

The most up-to-date diagnostic methods and treatments are applied in conjunction with the Departments of Gynecology and Obstetrics and Psychiatry in both female and male sexual dysfunctions.

Treatment of kidney and urinary stones

This is the first time this method has been applied to a stone of this size.
The patient recovered from a 6 cm kidney stone in one and a half hours.

67-year-old Mürvet Gülbay, who lives in ISTANBUL, got rid of her pain for 5 years with a painless and no-incision operation for one and a half hours. Urology Specialist Faruk Yencilek, who pointed out that the operation performed by the method of breaking stones inside the kidney with a flexible system (flexible) is a first in the world in terms of the size of the stone, said, “Our aim was to pulverize the stones of this size and we succeeded”.

Method of breaking kidney stones in the flexible system (Flexible) implemented in Turkey for nearly 15 years. In the operation performed with a closed method without disturbing the integrity of the body, the kidney is reached by following the urinary tract upwards. The stone in the kidney is pulverized by laser. Stating that he has been applying the flexible method to his patients since 2003, Yeditepe University Hospital Chief Physician and Urology Specialist Prof. Faruk Yencilek said that they have broken such a large stone with the Flexible method for the first time in the world and in our country.

“This big stone, not yet seen in the literature”

Underlining that thousands of patients have been treated with this method without pain and suffering for years, Dr. Faruk Yencilek said, “Over time, our experience in this method we use has increased. In this method, which was initially applied to smaller stones, we reached up to 6 centimeters with the last operation. According to the literature review I conducted, until now, a 6 cm stone was not operated on to clean the kidney stone with a flexible system. The operation Ms. Mürvet underwent is a first. Our main goal was to grind such a large stone into powder and we did just that. We placed a stent inside the kidney to expel small dust. “After one month, the system will be completely cleaned and we will take that stent and finish the process,” he said.

Emphasizing that our country is located in the hot zone called the stone belt, Professor Yencilek said, “Kidney stones are seen in approximately 14 percent of our country. One of the most common causes of chronic kidney failure in Turkey is kidney stone disease. Therefore, they must be treated. If kidney stones are not treated, they progress and damage the kidney. In addition, it should be noted that stones can recur after only one treatment, if not followed up adequately. Cleaning the stones is important in this respect. Just as we are a normal risk group for childhood diseases in childhood, we are starting to be a normal risk group for urological diseases even if we have no complaints above the age of 40. Although stones can be seen at any age, especially everyone over the age of 40 should undergo a urological examination once. People with stone disease and obese in the family should be careful, drink plenty of fluids, exercise should be done instead of adopting a sedentary lifestyle “.

“I can no longer look at the stones”

Mürvet Gülbay, who explained that she had pain in her kidneys for 5 years, said that she always postponed the treatment and took painkillers. Expressing that she went to the hospital immediately after the blood he saw in his urine, Gülbay stated:

“In the examinations, first it was revealed that there was an infection, then a 6 cm stone was detected in my kidney. Some nights I had severe pain that I could not stand, barely making it to the morning. I did not experience any pain during and after the operation. I was discharged from the hospital overnight. I feel so good that I still can’t believe it. I’m passing gravel right now, but I have no pain. I excrete stones out of the urine in powder form. I drink plenty of water. Even words are not enough to describe my happiness.

I regret that I have not consulted a physician until this time. I’m telling everyone that ‘just go right now and have a kidney examination’. I can no longer look at the stones, but I am very good, thank God. I just can’t believe it.”

Tarkan Gülbay, the son who explained that his mother was sleepless at night due to pain, said, “Her pain was very disturbing to my mother. It made her sleepless at night. We helped him as best we could. We immediately took action when we observed blood in urine. We are very happy that she got over the disease comfortably, “he said.

What is Prostate Cancer? What are the Risk Groups?

With the newly developed focal treatment, the tumor focus in prostate cancer is burned and destroyed. Yeditepe University Hospitals Urology Department Head Faruk Yencilek states that thus, side effects that can occur in classical surgery and radiation therapy are not observed and the cancer focus can be eliminated.

Emphasizing that prostate cancer ranks second after lung cancer in our country, Yeditepe University Koşuyolu Hospital Chief Physician and Urologist Prof. Faruk Yencilek added; “On average, one out of 12 men is diagnosed with prostate cancer. It is estimated that around 30 thousand men in our country each year get prostate cancer. However, only 4-5 thousand of them can be diagnosed. The most important factor in this result is the insufficient awareness of early diagnosis and screening methods. “

While prostate cancer is 65 per hundred thousand in Europe, this rate is 37 per hundred thousand in our country. It is seen at least in Chinese, South East Asian countries in the world. Another important factor is genetics.  This disease is a type of cancer that has the potential to be passed on from father to son. If a person has prostate cancer in a first degree relative, that person’s risk of developing prostate cancer is twice as high. The risk increases five times if there are two people in close relatives, and 11 times if there are three.

How Prostate Cancer Develops, How is the Diagnosis Made?

What are the symptoms of Prostate Cancer?

What Should be Done After Prostate Cancer Diagnosis, What are the Treatments?

Saying that the most important point in patients diagnosed with prostate cancer is the staging of the disease, Yeditepe University Kozyatağı Hospital Chief Physician Prof. Faruk Yencilek also stated: “Because the treatment approach changes according to the stage of the disease. Today, more prostate cancers caught in the early stages (limited to the prostate) brought new treatment approaches with it.

In the past, only surgery or radiotherapy was applied to all organ-limited tumors, but now the concept of “Focal Therapy” has entered the literature and practice in the world. Focal Therapy (HIFU) provides relief from cancer in early stage tumors that do not extend beyond the prostate, while reducing the likelihood of complications of the disease. In other words, in this method, early detected tumor focus in the prostate is burned and destroyed. “

* Screening in prostate cancer is done by PSA and rectal examination.

* If cancer is suspected, ask your doctor for Multiparametric Prostate MRI.

* Have your prostate biopsy under mp-MRI guidance.

* If local, find out which risk group (low, moderate, high) they are in. If you are in the low and moderaterisk group, be sure to talk about HIFU treatment.

PSMA is a smart molecule used in both imaging and treatment of prostate cancer. Ga-68-PSMA PET / CT is the method used in imaging high-risk prostate cancer and detecting its spread to the body.

Patients with increased PSA (biochemical recurrence) after prostate surgery or radiotherapy may show higher rates of recurrence according to MRI and bone scintigraphy. It is also the most sensitive method in detecting spread (metastases) to lymph nodes, organs and bones. It is also used for patient selection suitable for Lu-177-PSMA treatment of metastatic and hormone resistant prostate cancer.

With this method, very high amount of radiation is not administered to patients. The procedure takes 30-45 minutes. In conventional FDG PET/CT imaging, sugar metabolism is examined. Many cancers can be detected. However, it doesn’t work very well in prostate cancer. PSMA PET / CT is used only in prostate cancer and is very effective. We use Ga-68 PSMA PET/CT imaging to find and view tumor cells in the body at the molecular level.

When Is Lutetium (Lu-177-PSMA) Therapy Used in Prostate Cancer?

Lu-177-PSMA (Lutetium) treatment has been used as a new treatment option in the treatment of metastatic and hormone-resistant prostate cancer in recent years. It is a smart molecule that finds prostate cancer cells in the body and enters it. It kills the cancer cell by irradiating inside the cells. In this way, while affecting the tumors, it irradiates the surrounding healthy tissues very little. Damage to normal tissues remains very low. Therefore, this treatment is called targeted therapy with smart molecules.

After Lu-177-PSMA treatment, PSA values ​​decrease more than 50 percent in about half of the cases. During the treatment, the patient does not feel any side effects. After the treatment, a partial decrease in the functions of the salivary glands can be observed.

How is Lutetium (Lu-177-PSMA) Treatment Applied in Prostate Cancer?

Lutetium 177 DOTATATE treatment is usually applied as 3 or 4 cycles at 6-8 weeks intervals. It can be applied up to 6-8 cycles according to the course of the disease, kidney functions, blood values and dosimeter calculations. Patients eligible for treatment are determined by examination by experienced Nuclear Medicine physicians. This treatment is given to patients in a protected special room under the supervision of experienced health personnel, nurses and physicians in the form of slow infusion between 20-30.

Today, is the anniversary of my rhinoplasty surgery. For a year, I have been looking to the mirror as a new version of beautiful Elina. I had been thinking about having surgery. So, I searched for it and reached Medicatürk. First, I called them and they told me about the process. After that, they encouraged me about the process and I decided to take the surgery. It was awesome. My face really changed and I gained a lot of confidence.

Get a free quote for your treatment!

Open yourself to a whole new world of medical travel, and discover the beautiful places and healthcare experiences that await you around the globe!

Medicatürk focusing only on a seamless patient journey, helping patients on their travels from beginning to end.